APersecution, criminalisation and stigmatisation of LGB in countries of origin BHomosexuality in the destination countries CMixed views - religion and homosexuality

According to a comprehensive analysis of sexual orientation laws conducted by the International Lesbian and Gay Association (ILGA) in May 2018, seventy-three countries (37%) of UN members, recognize physical relations between people of the same sex as illegal. 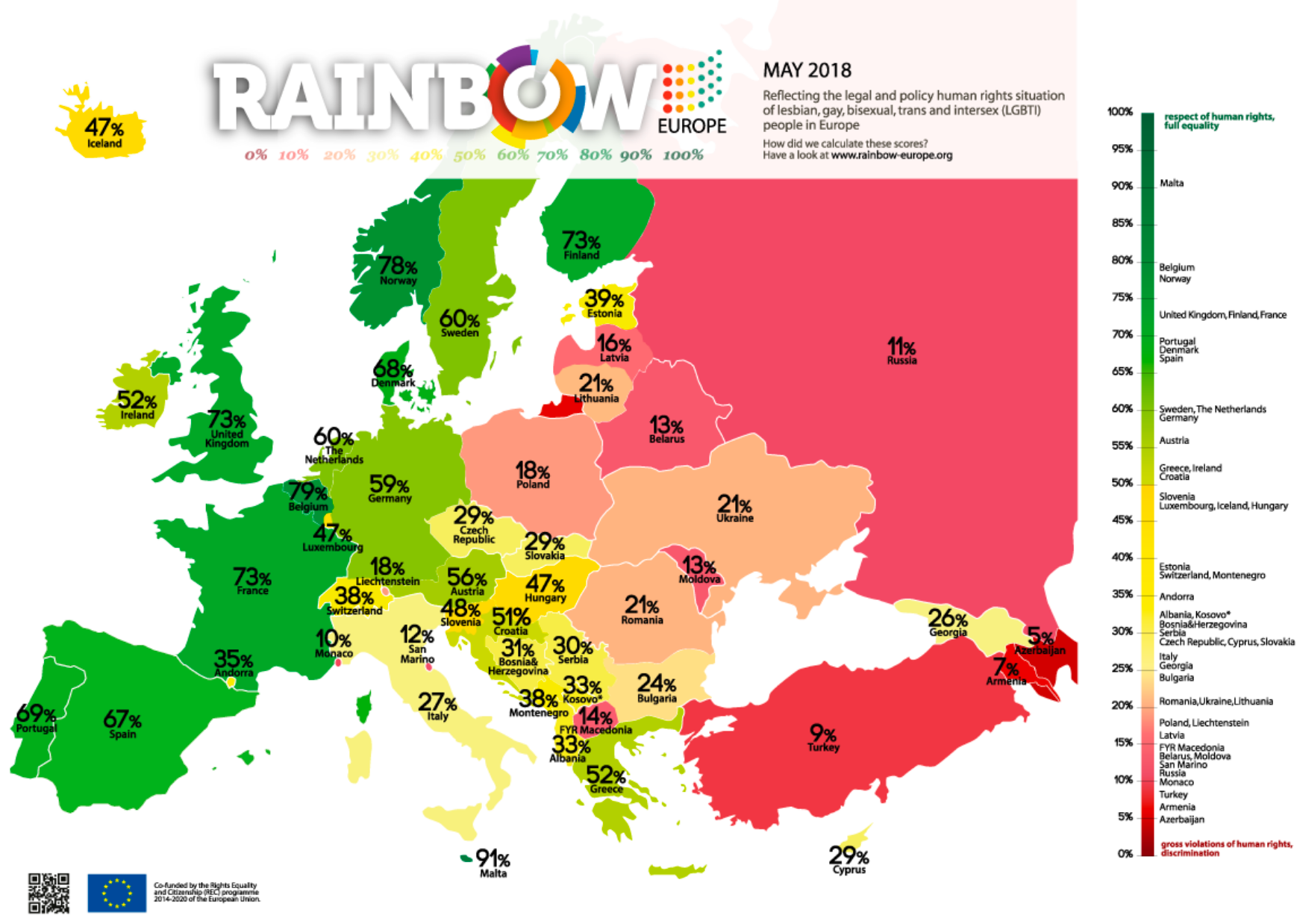 The report shows that Sudan, Iran, Saudi Arabia and Yemen demand capital punishment for homosexual contacts at the level of the whole country, while other countries may impose a death penalty regionally, along with fines and imprisonment sentences. Although criminalization mainly focuses on Africa and the Middle East, as shown in the above map, it is also present in the Caribbean and elsewhere.

The author of the report, Aengus Carroll, states that in three-quarters of these countries, the law is a remnant of colonial times. In India, for example, Section 377 of the Criminal Code, which forbids "a bodily relationship incompatible with the laws of nature," was established under the British rule in the 1860s. It was overthrown in 2009 and then restored in 2013 (SOURCE).

Alok Gupta writes in the 2008 Human Rights Watch report that Section 377 has become a model for penalizing sexual contacts. - It influenced laws in Asia, the Pacific Islands, and Africa - almost everywhere where the British Empire reached. (https://www.hrw.org/sites/default/files/reports/lgbt1208_web.pdf).

In other places, new laws suppress sexual expression, forbidding "propaganda" and "promoting" LGBT movements. Russia, for example, legalized same-sex relationships in 2003, but in 2013, it banned the public affirmation of "non-traditional sexual relations". Last year, the founder of the LGBT Internet portal for teenagers, Lena Klimova, was convicted and fined for failing to comply with this law. The story of this young brave journalist, who in 2013 set up a Children-404 portal, can be found here.

On one hand, the UN treaty bodies (ICCPR, ICESCR, CRC, CEDAW) have been constantly asking governments to respect and protect the rights of all people, without discrimination on grounds of sexual orientation for the last decade. However, in various UN agencies, during world conferences, governments did not want to acknowledge the existence of the problem of human rights violations due to sexual orientation. The Commission's resolutions or texts adopted at world conferences (such as during the World Conference on Women in Beijing, September 1995) systematically deleted references to sexual orientation (SOURCE).

On the other hand, organizations defending the rights of LGBT people and dealing with issues of human sexuality and human rights are being created all over the world. Often, activists of these organizations are struggling with difficulties, such as social exclusion and physical attacks. In 2001, the representative of the Secretary General noted that those who defend the rights of persons belonging to sexual minorities are particularly vulnerable to repression and marginalization.

The scope of rights has been extended in some countries, according to ILGA. The countries of South America, including Brazil and Argentina, have made great strides and allowed citizens to legally declare their gender. What is more, their national institutions dealing with human rights increasingly accept that sexual orientation and gender identity are human rights issues and deserve to be understood.

In the European Union, only Latvia is more homophobic than Poland. On the other hand, Poland holds 38th place in 49 countries across Europe. Even on the International Day Against Homophobia, Polish MPs could not accept that rainbow flags hung on the masts of the European Parliament, they protested against placing rainbow colors on the building of the European Parliament and even sent a special letter of complaint in this case.

According to the Polish Campaign Against Homophobia (https://kph.org.pl/), the scale of violence against LGBTI people in Poland is shocking. This is indicated by the results of recent studies, according to which as much as 70 percent LGBT people have suffered violence over the past two years (SOURCE). Nevertheless, the Polish government consistently resists equality trends and does nothing to increase the security of 2 million LGBTI citizens.

What is more, LGBT people living in Poland cannot count on protection against discrimination in healthcare and education. Another limitation is the obligation of divorce for transgender persons agreeing on their gender and no prohibition of surgical intervention without the informed consent of intersex persons (SOURCE).

The situation in Poland is so alarming that even the Helsinki Foundation for Human Rights prepared a special report on it. On the one hand, Poland is praised for improving the situation of LGBT people in terms of freedom of assembly (an example is Europride march  in 2010, which took place without obstacles) and granting international protection to LGB persons due to the risk of persecution for reasons of sexual orientation.

On the other hand, in the report, Poland is often accused of negative practices: Poland does not undertake efforts to improve the protection of LGBT persons in such a way that the prohibition of discrimination covers such diverse areas of life as in the case of non-discrimination based on racial and ethnic origin. In Poland there is no independent ‘equality body’ that would deal with the problem of discrimination against LGBT. In Poland the incitement to hatred, violence or discrimination against LGBT persons is not explicitly included as a crime. Poland has many restrictions on entry and residence in Poland (within the flow of persons regulated by EU law) of a same-sex spouse. The negative practice of Polish offices that made it difficult for Polish citizens to conclude same-sex relationships in countries where they are legal by refusing to issue the necessary certificates.

The few LGBT persons from among those who face discrimination on a daily basis manage to leave their country of origin and seek refuge from persecution. However, many countries are reluctant to grant asylum to people fleeing persecution related to sexual orientation or gender identity.

To understand where discrimination comes from, one has to refer to the concept of stereotype. Paraphrasing the dictionary definitions, it is a simplified picture of someone or something, usually based on partly false judgments, functioning in the social consciousness and not easily changing (SOURCE). The stereotype assigns identical features to all members of the group without exception, regardless of the actual differences between them. We all become stereotyped and often we stereotype people, but not everyone is aware of it. Stereotypes can be applied to ethnic groups, nationalities, religion and sexual orientation.

Some stereotypes can appear quite humorous or ridiculed (jokes about blond women for instance) but they can lead, especially the ones we are not conscious about, to prejudice, or a negative attitude to a group of people, only because of belonging to it.

Prejudices can be made from fear of unknown and strangers, ignorance or media reports. Prejudices, being “a negative attitude towards someone” (wikipedia), may lead to discrimination, i.e. unjustified, negative or harmful action directed against members of a given group, due to their membership in it. One of the manifestations of discrimination is hate speech, a topic widely discussed in contexts of a classroom environment and media.

While searching for information and answer to the question ‘how education can break the stereotype - prejudice – discrimination chain’ I came across “A Guidebook for Educators Anti-Semitismis no a view” (“Podręcznik dla edukatorów I edukatorek. Antysemityzm to nie pogląd”) published by Jewish Association ‘Czulent’ in Poland. I believe that the book should be translated into English and made available worldwide because the fight with discrimination in an international matter and can be applied to its different kinds.

The book presents some theoretical insights into the topic of stereotype - prejudice – discrimination but first and foremost it presents techniques and tools used during the workshops with young people. Amnesty International, among others, also trains educators in the field of Human Rights and organizes workshops with young people. What they present is the theory as well as practice in recognition of stereotypes. While working with young people and hearing generalizations about a given group of people, they always ask where this knowledge comes from. Does it come from a personal, individual experience? From a story told by a friend? Or maybe from the media? They teach youngsters to critically analyze the messages and also work on their own identities by answering question “Who am I and what is important to me”? Self-awareness is crucial in recognizing our own stereotypes and limitations.

One of the techniques used at these workshops is a simulation that gives the participants the opportunity to "step into the shoes" of the discriminated person. For example, through the "Step Forward" exercises, people assume the role of persons belonging to minorities and those experiencing discrimination, people with disabilities, refugees or people suffering from AIDS. People participating in the exercise decide for themselves to what extent they are discriminated against and whether they have the same life options as others. This forces them to reflect on the situation of these people, teaches empathy, but also through reflection on the reasons for this state of affairs, encourages them to think about what they can do to give them all basic rights, regardless of origin, gender or disability (SOURCE).

One of the most effective tools used in working with youth are meetings with discriminated people. During one of projects conducted by Jewish Association ‘Czulent’ named "With Refugees", their educators, together with people with refugee experiences, visited schools all over Poland. Pupils and students, thanks to conversations with such people, saw someone more than a "refugee who wanted to invade our country". They saw a man of flesh and blood, with his own history, interests and sympathies. A man whose identity goes far beyond the status of a refugee.

A quotation by a world-famous writer Haruki Murakami can serve as a summing up thought:

“Only people who've been discriminated against can really know how much it hurts. Each person feels the pain in his own way, each has his own scars.”

Please visit our module pages on LGBT support institutions and the Homo'poly library for relevant resources.

Below are our project partners